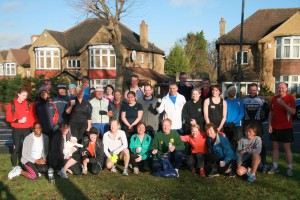 Striders of Croydon are based at the Sandilands Sports and social club www.sandilandsclub.co.uk  in Sandilands, Addiscombe, Croydon. If you are interested in joining us email stridersofcroydon@gmail.com or contact one of the committee members listed on the committee page or come along to one of our sessions and speak to whoever is leading the run. You are welcome to run with us a couple of times before formally joining and paying your subscription.  Click on Join Us on the front page for more details of subscriptions and membership forms.

The runs leave promptly at the stated time so aim get to the club house about 10 minutes before hand. There are changing facilities at the club. Click on Guidelines for more on what to wear and guidelines to running in a group.

Sundays
Sundays – 8.30am – Generally a slow off-road run through the parkland and woods heading south out of Croydon.  It is possible to travel from Lloyd Park out into the Kent and Surrey countryside and in doing so you will rarely see a road.  The run normally splits into two groups after about 30 to 40 minutes so that those who only want to run for an hour can return to the Clubhouse and those who want to run for 90 minutes plus can continue.

For steadier runners there will sometimes be a slower group which sets off at the same time on a Sunday. Look out for the emails that are sent round for when a steadier paced group has been organised.

During the London Marathon training season, a number of runners split into a further dedicated group which aims to incrementally build up long slow road mileage from early January, starting with an hour and increasing to around 3 hours by early April.

One  at Croydon Arena .  Meet at the Arena by 7.15pm to warm up, stretch and two laps of ‘strides’ in time for a 7.30pm start.  Sessions split into quick and not so quick groups for speed work/repetitions.  An essential training component for anyone seeking a significant improvement in their PB times.  See latest monthly schedule for details.  Sessions last about 40 minutes. There is an entrance fee of £3.50 to the arena or you can buy a season ticket.

The other from the clubhouse with an emphasis on hill training. This is in Coombe Park playing fields in the summer and on the roads round Sandilands in the winter. Again meet in time for a 7:30 p.m. start – sessions are about 40 minutes.

If you can’t yet jog for about 40 minutes without stopping there is a beginners group which meets at Lloyd Park cafe on Tuesdays at 7:30pm. If you would like to join this contact Beatrice Schaer directly at bschaerdc@yahoo.co.uk or call 07984052823. You can also find information on Facebook under www.facebook.com/BeCoolRunning/

Wednesday
The largest run of the week leaves the club house at 7:30 usually as four groups. There is the option of running for 40 minutes or an hour in one of  4 groups ranging from fast (7 minute miles) to steady (about 11 minute miles).  In the summer months this is mainly off road, in the winter months it is on the roads around South Croydon, Sanderstead, Selsdon and Shirley.

Wednesday is also the main opportunity to meet for a drink in the clubhouse afterwards.

Thursday
Swimming.
We hire the pool at Trinity School for an hour at 8:45 p.m.. All club members are welcome to come along at a cost of £7 a session. Our resident coach sets drills and sessions based on your ability. For some this is an opportunity to improve swimming skills, for others an additional opportunity to keep fit and for others training for triathlons. Club members compete in various Duathlon & triathlon events during the year.

Friday
No official run though club members may arrange to meet for an informal run at 7:30.

Saturday
Club members are encouraged to run in the various men’s and women’s league cross country and road events which take place on Saturday afternoons.  The more runners we enter the more chance the club has of succeeding.  The club pays your entry fees for many of these events so please come along if you can.

The schedule of events is at Fixtures

Other Events
Striders organise a number of our own races. The highlight of the calendar being the ‘Switchback Five’, an open five mile multi terrain race around Lloyd Park and Addington Hills, which usually takes place in September as the cross country season is about to begin and the Croydon Half  Marathon in early April on the roads around Lloyd Park. The club also arranges a series of internal 5-mile handicap events in the summer.  This is a chance for runners of lesser ability to compete on equal terms with faster runners.

Since 2003, the Club has also been a leading partner in helping to stage the annual Race for Life women’s 5k event in Lloyd Park.  The race/walk involves over 4,000 women raising money for cancer charities through the Race for Life organisation.

At intervals during the year we arrange Sunday morning runs away from the clubhouse.

E.g:- Catch the train out to Oxted, Coulsdon or Merstham and running back to the club house.

Runs along the Thames path from Clapham Junction to Kingston or London Bridge to Greenwich and back.

We also organize a monthly Mile Time Trial : this is open to all Striders and takes place on the first Wednesday night of each month at 7.10 p.m. around the quiet pavements of Sandilands during British Summer Time only (April to October).

The club arranges a number of it’s own social activities which have been as diverse as quiz nights, barbecues, snooker, bowling, athletics meetings and a number of charity fund-raising events.

We regularly participate in events such as the London Marathon and the Great North Run. We often travel overseas to running venues such asNew York, Boston, Disney World, South Africa, the Channel Islands, France and Lanzarote in organised groups.

Why join?
Being a member of a running club has many advantages over being ‘unattached’. Financial advantages include discounts on shoes, clothing and equipment. The club is affiliated to UK Athletics (UKA) and the Surrey AAA, which qualifies us for entry discounts on many race entry fees. A club offers the opportunity to train with people with similar interests and standards.  Club members have a wealth of experience available to pass onto to those seeking to take up running.